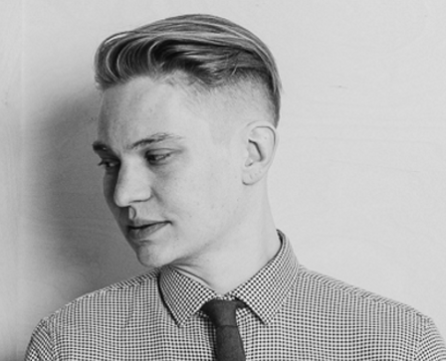 chmara.rosinke studio was found in 2011 in Vienna by Ania Rosinke and Maciej Chmara. chmara.rosinke studio designs, directs and executes objects, products, interiors and pop-ups from concept through to creation. They strive to combine craftsmanship with a conceptual and ecological approach, realizing both commissioned and self-inititated projects. Many of their works are inspired by functional and socio-cultural aspects und are trying to translate their observations into objects after its analysis and research. In their designs chmara.rosinke pay a lot of attention to details and the emotions objects and spaces arouse in people. Above all, they see aesthetics as an important sustainability factor. They have met during their architecture and design studies at the Academy of Fine Arts in Gdansk. Their shared passion for design and art has led to their cooperation. After finishing studies in Gdansk, they have spend two terms at the Kunstuniversität in Linz (space&design strategies), some time at the Akademie der bildenden Künste and the TU Wien, and have worked at several architectural offices. Their background includes a wide range of fields from drawing, art history, architectural theory to interior and object design, what allows them to develop a good understanding for creative work and its realization. Their projects have been shown during the Milan, Dutch, Paris, New York and Vienna Design Week , in MAK, the Austrian Museum of Applied Arts, and other international design fairs and exhibition. Chmara.Rosinke have received many internationally appreciated awards like between others the Neue Wiener Werkstätte Design Award 2012, DMY Berlin Award 2012, a recognition of the Outstanding Artist Award for Experimental Design, in 2014 were finalists of the prestigious The Prix Émile Hermès and were distinguished as MAK designer-in-residence in 2013. Their works are a part of the collection of MAK Austrian Museum of Applied Arts, Hofmobilien Depot, Klaus Engelhorn, Gallery Himbeer&Soda, Gallery BB and private clients. Ania and Maciej have been also touring many cities around the world with their cooking project „mobile hospitality“ and just came back from New York where they were realizing project with several galleries and cultural institutions. They have realized works for COS (H&M Group), Fondation Emile Hermès,Wallpaper*, Merci Paris, Caritas, VDW, MAK, ACFNY, NWW, City of Vienna, Nespresso … Their works were published in FRAME, Le Monde, Die Zeit, Elle decoration, Domus, Vogue, Icon, AD, this is paper, Damn, Li Edelkoort’s trend tablet and many many more.